That part of the mushroom that rises above the ground is called the fruiting body. The rest of the mushroom is underground and looks like a mass of tangled threads. These threads are called mycelium. Mycelium grows from very small spores (like dust particles) and form an extensive network in the substrate on which the fungus grows. In certain periods, depending on the season and environmental conditions, the fruiting body, which we popularly call “mushroom”, appears on the surface. 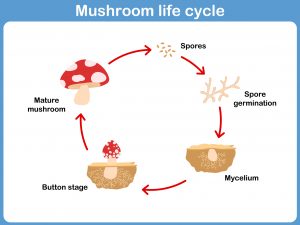 In a variety of macroscopic fungi, the fruiting body has a specific, “umbrella” shape. In many species, under the “hat”, there are radially placed lamellae on which the spores develop. The spores fall, are carried away by the wind and when they reach fertile surfaces, new mushrooms will develop from them.

Mushroom spores can be stored – their storage is practiced by growers as well as by researchers who use microscopic psilocybin mushroom spores to study in the lab.  In general, the spores are kept in the form of prints (the mushroom is left on paper so that its spores fall on it), or they are introduced in a syringe with a sterile liquid solution. In both cases, the spores can be kept even for a year. In order not to lose their viability (in which case they will become useless…), spore prints and syringes must be stored under certain conditions.